My teachers were the painters Amadeo Roca and José Esperet. 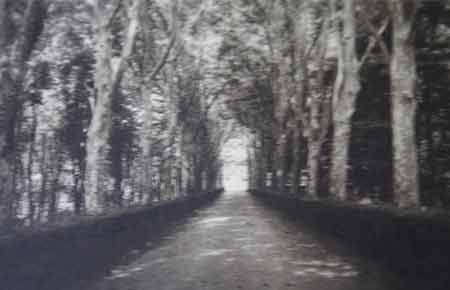 I was born the 9th day of the 9th month of 1959 in Moreaga de Icaza, (Berango, Vizcaya) in my mother’s family home. As you can note from my birth date, 9 seems to be my number. The number of the eremite: a character that appears with a candlestick in his hand to illuminate the path of the pilgrim that walks by and is in need of light… To paint the human being. That was and is my vocation.

Therefore, even before I finished my studies, portraits became a reality in my life as a painter.

To paint someone’s portrait is to save him from his own darkness (to lighten the path of the pilgrim that passes through a painters’ studio...). To place the sitter in its own glory, that is the kind of revelation the painting grants.

When Balthus was asked to write an autobiographical note for a catalogue of an exhibition, he answered: “Balthus is a painter of whom we know nothing. Now, lets look at his paintings”.

In James Lord’s biography of Balthus, he depicted remarkably the enigma between the artists’ need for notoriety, who reveals to the public his own world and intimacy... but at the same time mysteriously preserves his privacy. It is not by chance that the first page of my book “Cracks, notes of a painter” is entitled “Business” and starts in such a way: “It must be sad to do business with ones’ own body, but it is also strange to put in offer the being that we carry within. It affects one deeply to see oneself hanging on the walls of a gallery, out in the open, exhibiting his own name and doing so with a label stating a price. To go out on the streets to sell: a ludicrous or sad trade, depending on how you look at it, but professions that are inseparable from oneself, body and soul are indivisible, trades that would not be needed if we were transparent, if everything reached equilibrium. Knowledge is silence; or emotion unchained in an instant”.

The truth of my painting is that the Portrait has softened these dilemmas, these apparent contradictions. I am commissioned a portrait and I paint it. What a blessed simplicity. In any case the chirping of the birds exists, whether it is heard by someone, or it is lost in the silence of the forest.

Nothing is more beautiful than the geography of the lit up face of a human being, the soul that appears between the light and the shadow. We are not painting the beauty nor the movement of a cloud or a sky, are we painting the mystery, also in movement, of the closest being. Thus, I have portrayed my children and the woman who is by my side, and my close friends. I have portrayed Royal families, ministers and the president of the Senate, presidents of banks and companies. I have done personal portraits and family portraits. Thirty years of painting means many faces, many hands, many pictures.

Uniforms and titles are not so important. Gazes do matter. And now, let us look at the paintings.